Since vegetable oil is not as easy to foam as butter (traditional cakes are made of butter), it is necessary to foam the eggs to provide enough air to support the volume of the cake. Chiffon cakes contain a sufficient amount of vegetable oil and eggs, so the texture is very moist and does not become hard like traditional butter cakes. Chiffon cakes also contain less saturated fat.

Chiffon cakes are typically baked in tube pans or layered with fillings and frostings.In the original chiffon cake recipe, the cake tin is not lined or greased, which enables the cake batter to stick to side of the pan, giving the cake better leverage to rise, as well as support in the cooling process when the cake is turned upside down to keep air bubbles stable.

Invented in 1927 by an insurance broker in California named Harry Baker, but the recipe was not made public.

In 1947, General Mills bought the recipe from Harry Baker.

In 1948, General Mills released the secret recipe for chiffon cake in the May 1948 Better Homes and Gardens Magazine, and it became a nationwide sensation.

In the 1950s, General Mills sponsored a series of chiffon cake contests, chiffon cakes are becoming more and more popular,people came up with all flavors of this cake during that time. 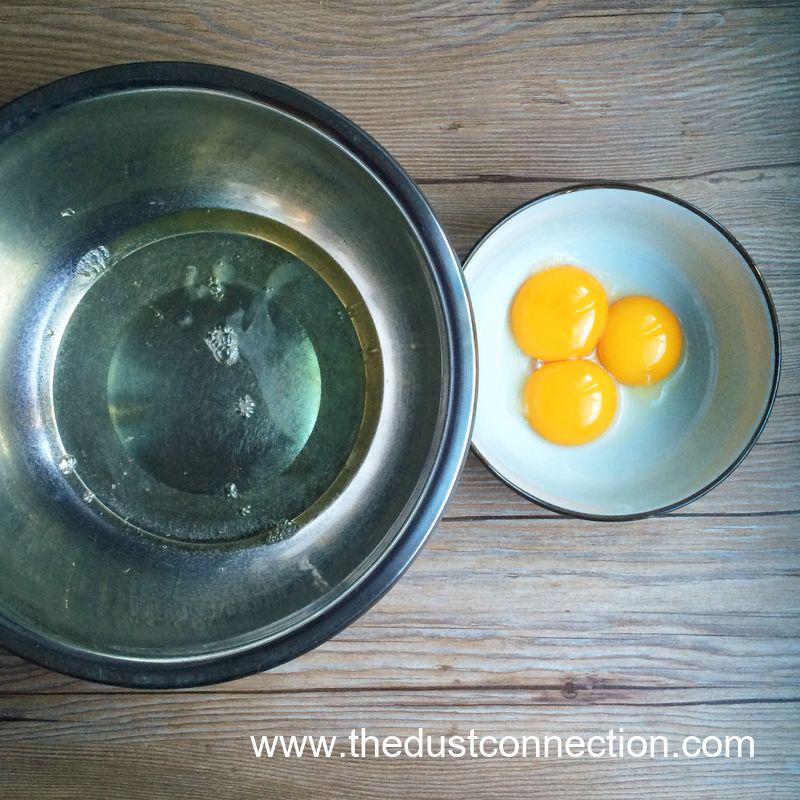 Separate the egg white from the yolk. The total weight of the egg with the shell is 140 grams. The container for the egg white must be free of oil, water and impurities. When separating the egg white, be careful not to have a drop of egg yolk in it, otherwise it will be difficult in a later step. 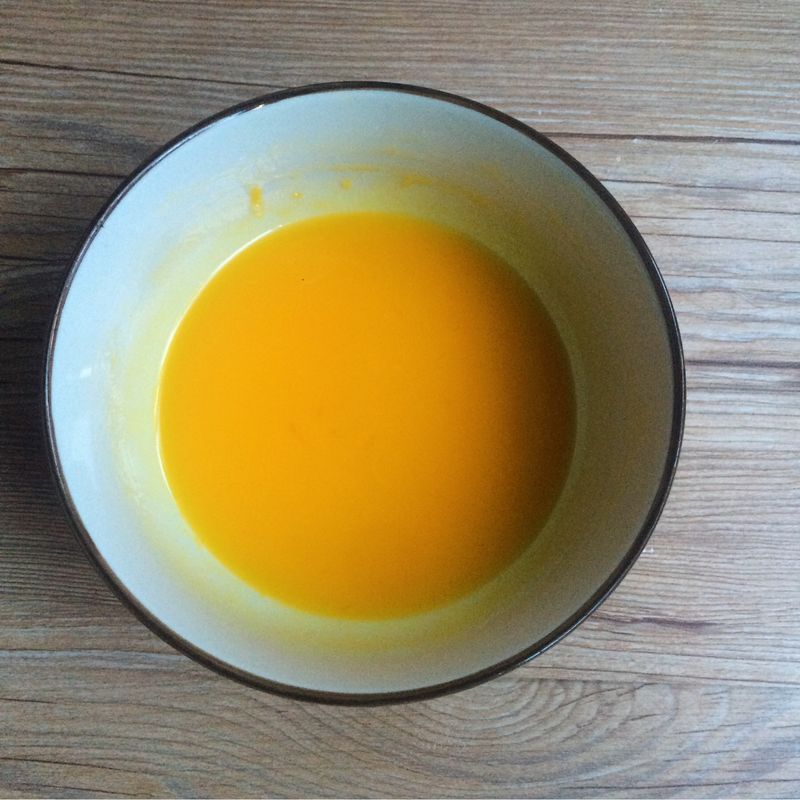 Beat the egg yolks with a hand mixer, add 30 grams of corn oil, and beat evenly. Corn oil can be replaced with sunflower oil, salad oil(these lighter-flavored oils), but butter, vegetable oil, and olive oil are not recommended. 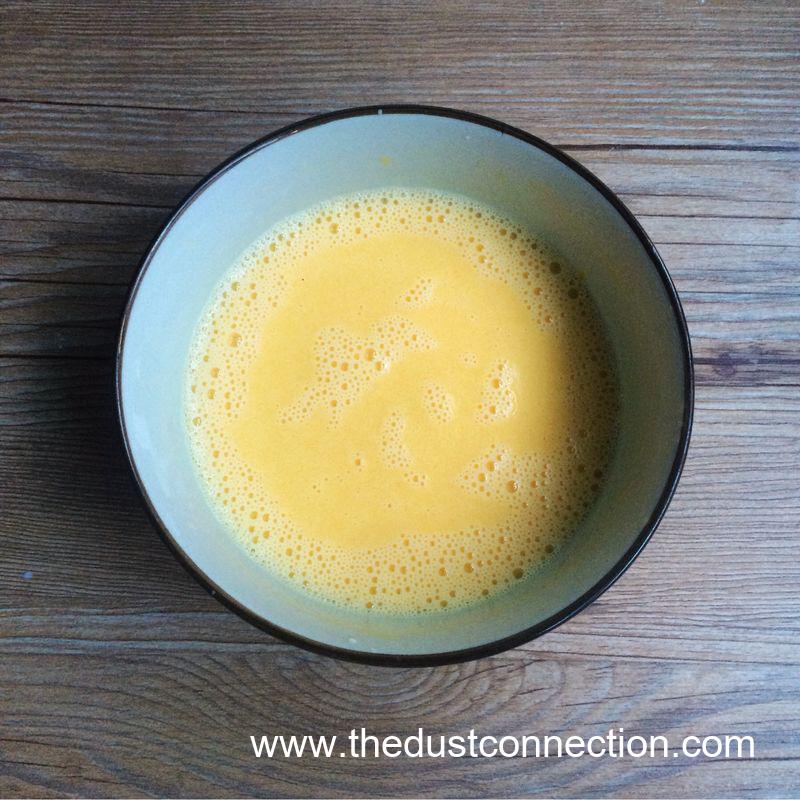 Then add 35 grams of milk and stir well, be sure to stir for a while to thoroughly mix the egg liquid with the oil and milk. 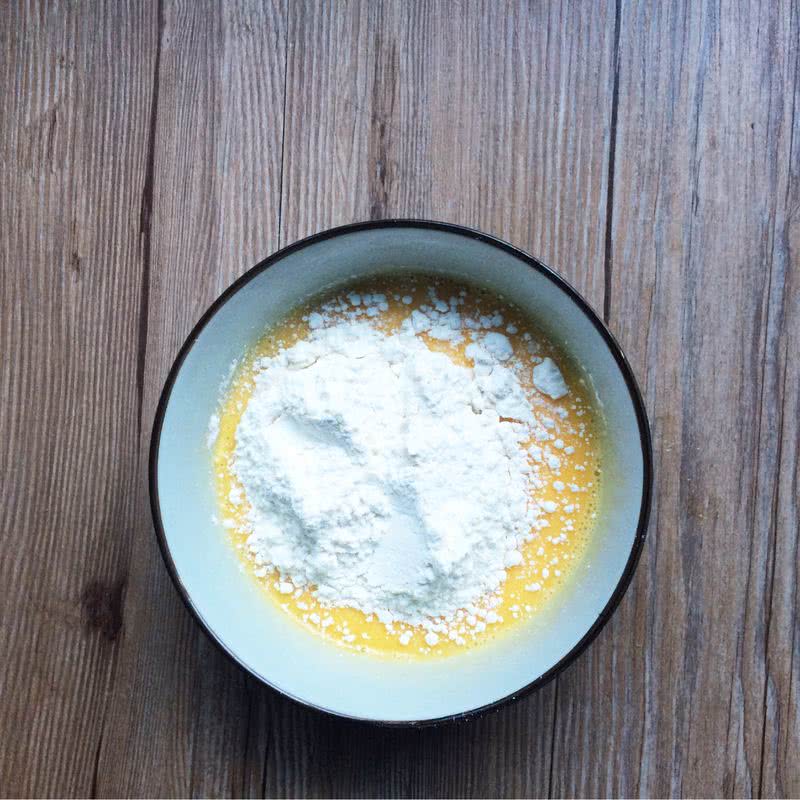 Add 45 grams of flour and mix well. When mixing, use an egg beater to gently stir back and forth in a Z shape. Do not stir in a circle to avoid tendons. 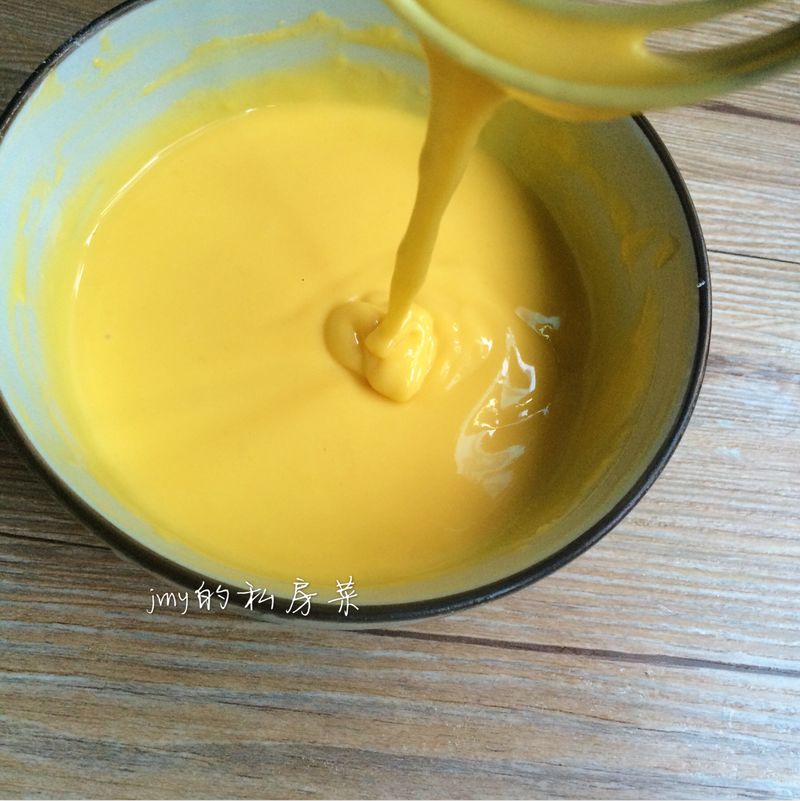 The egg beater is lifted from the batter, the batter drips easily and smoothly from the egg beater without dry powder, the egg yolk paste is successfully mixed, and set aside for later use. 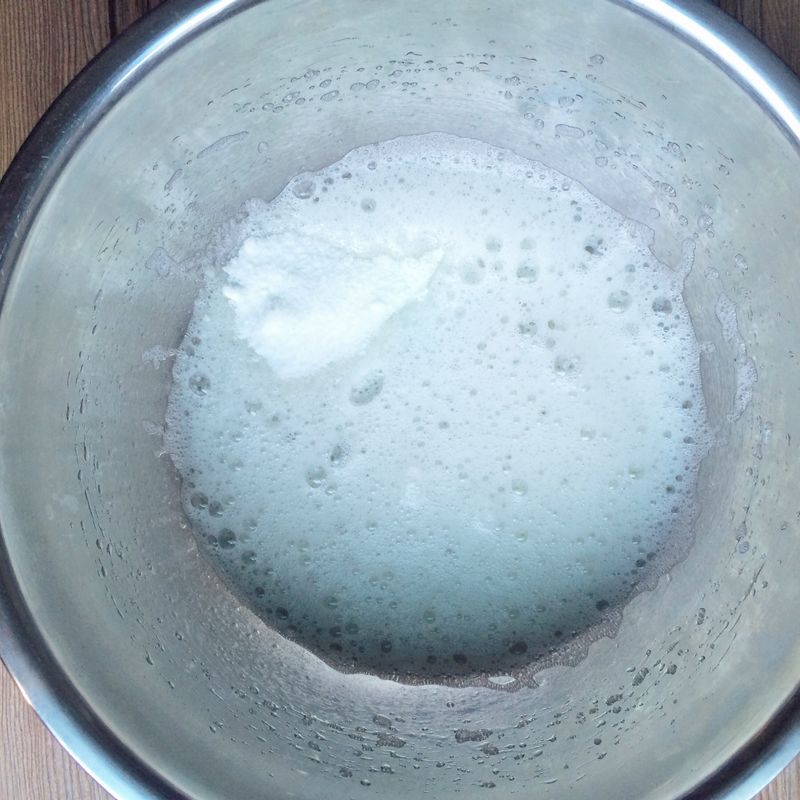 What is Powdered sugar?
I put the white sugar in the food processor, and it comes out as powdered sugar. 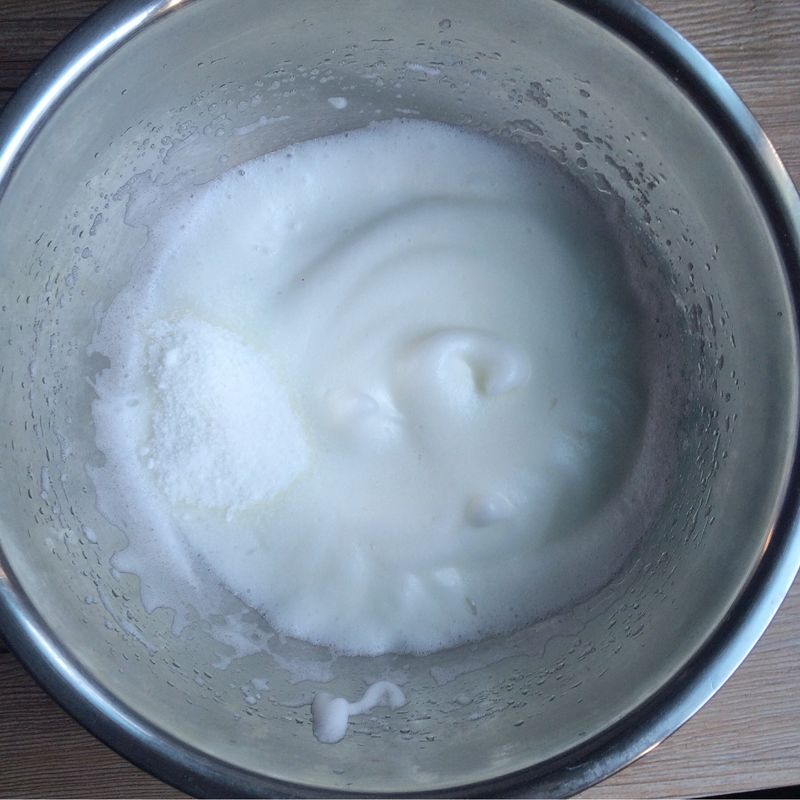 Continue to beat with an electric egg beater at high speed. When the egg white foam disappears, add a third of the powdered sugar. 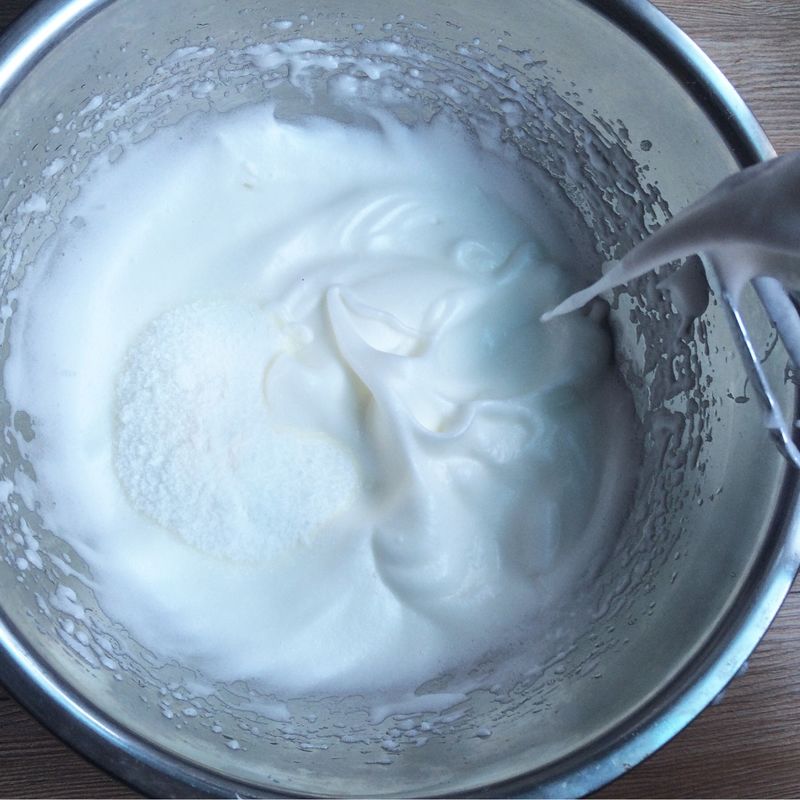 Continue to beat with the electric mixer on high speed, add the last third of the powdered sugar when it is foamy. 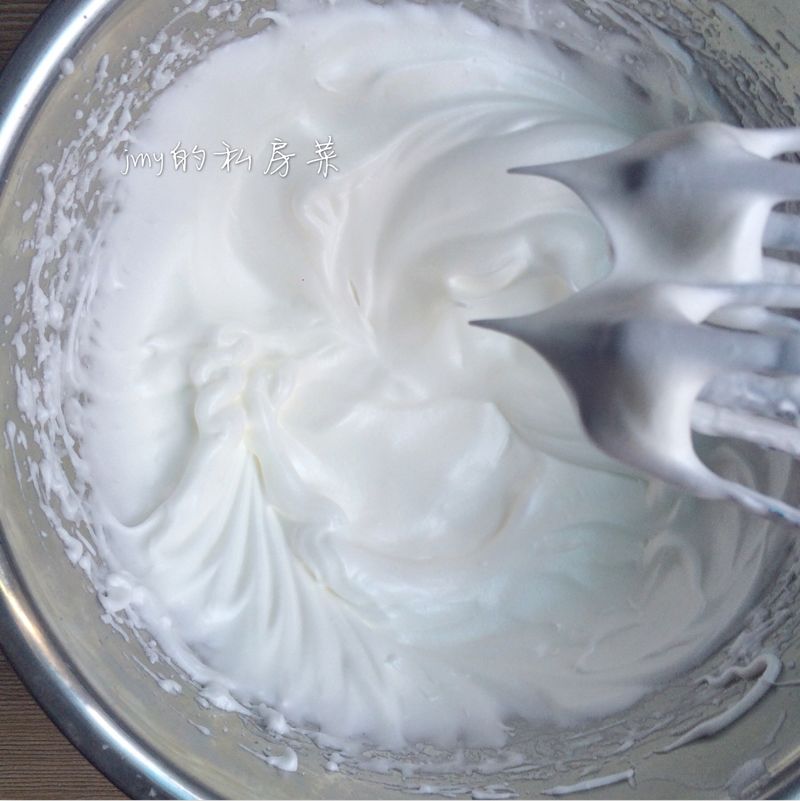 Continue to beat until fine lines appear on the egg whites. Switch the electric egg beater to a low speed for a while. When you feel some slight resistance, stop beating to avoid defoaming. Pick up the egg beater and look at it, showing upright small sharp corners , just fine. 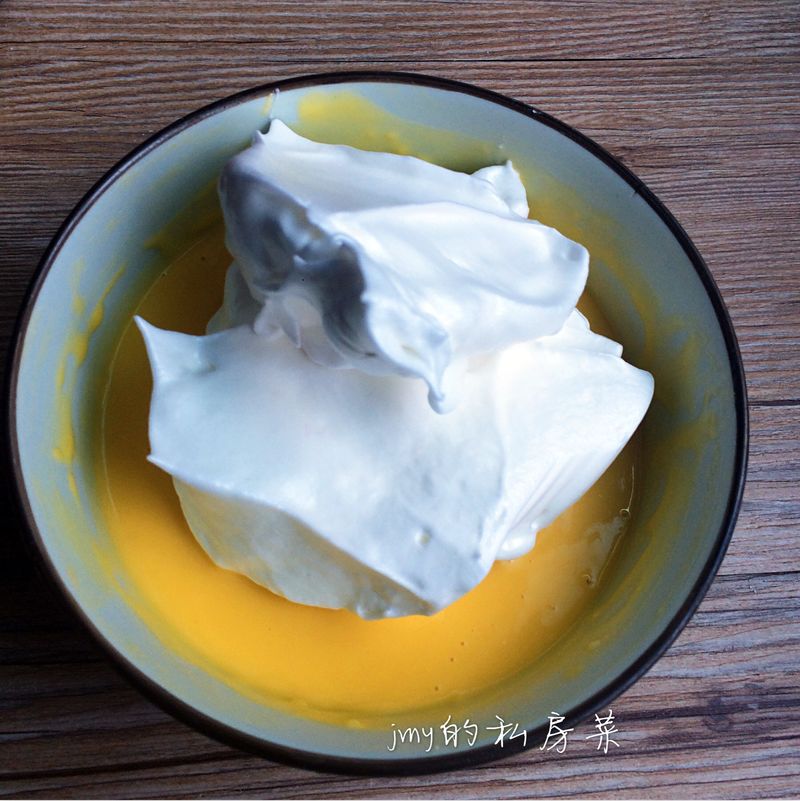 Use a spatula to take one-third of the egg whites into the egg yolk paste and mix evenly. Do not stir in a circle to avoid defoaming. Stir from the bottom like a stir-fry. Do not mix too heavily and use light techniques. 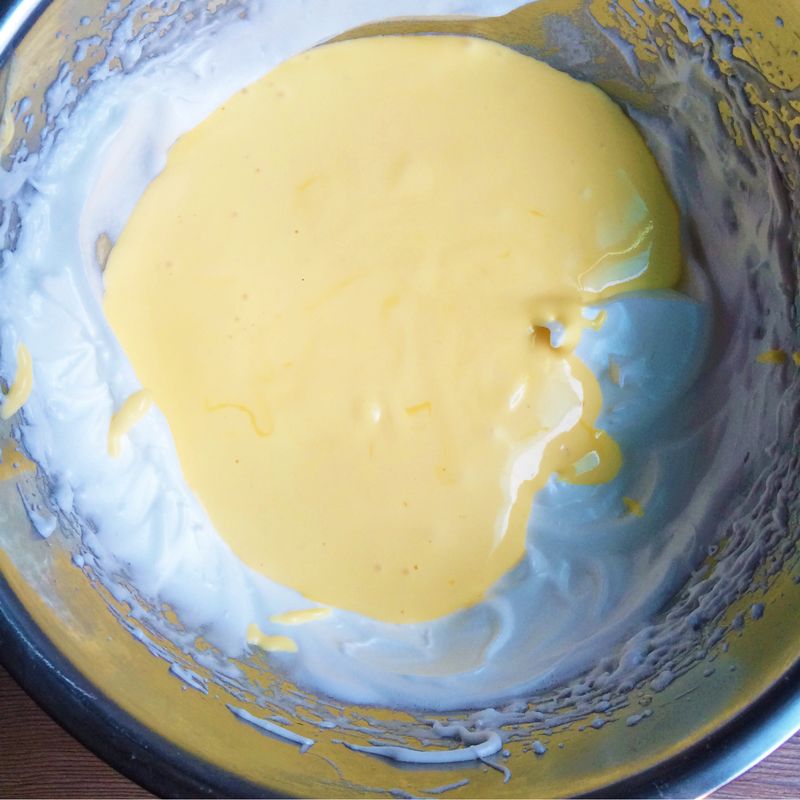 Pour all the mixed egg yolk paste into the egg whites, and stir evenly as you did just now. The movements should be quick and light. 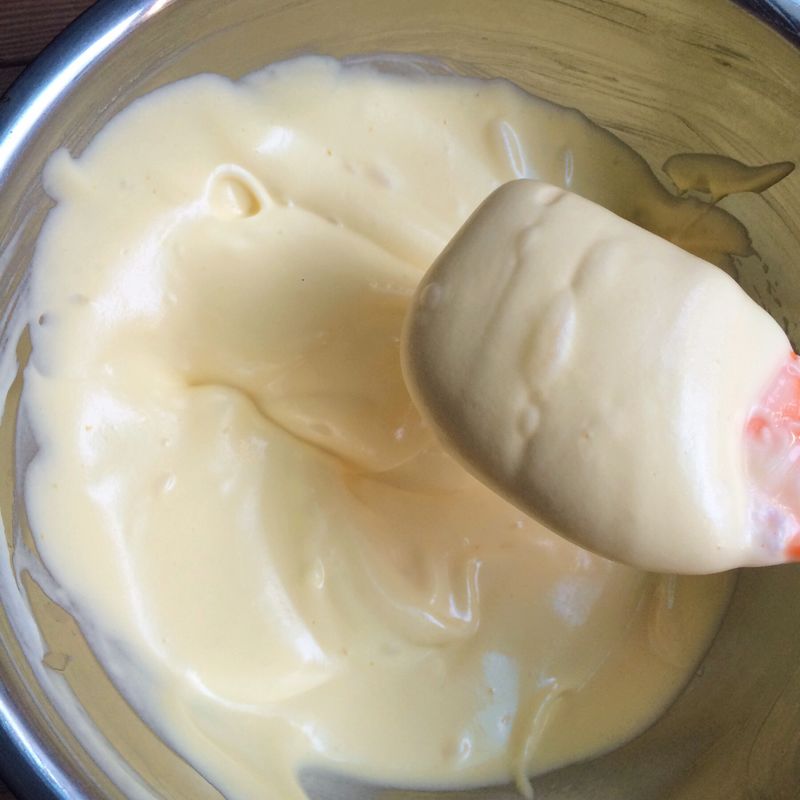 This is a mixed egg white and egg yolk paste, fine and smooth. 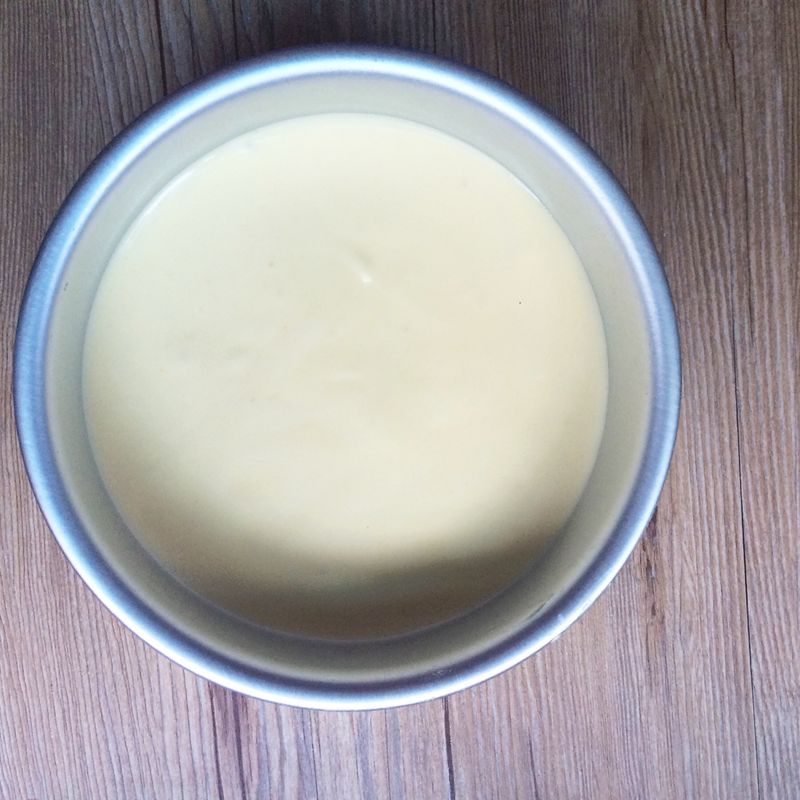 Pour the mixed batter into a 6-inch movable bottom mold, and drop it a few times vertically from a height of about ten centimeters to shake out large bubbles. 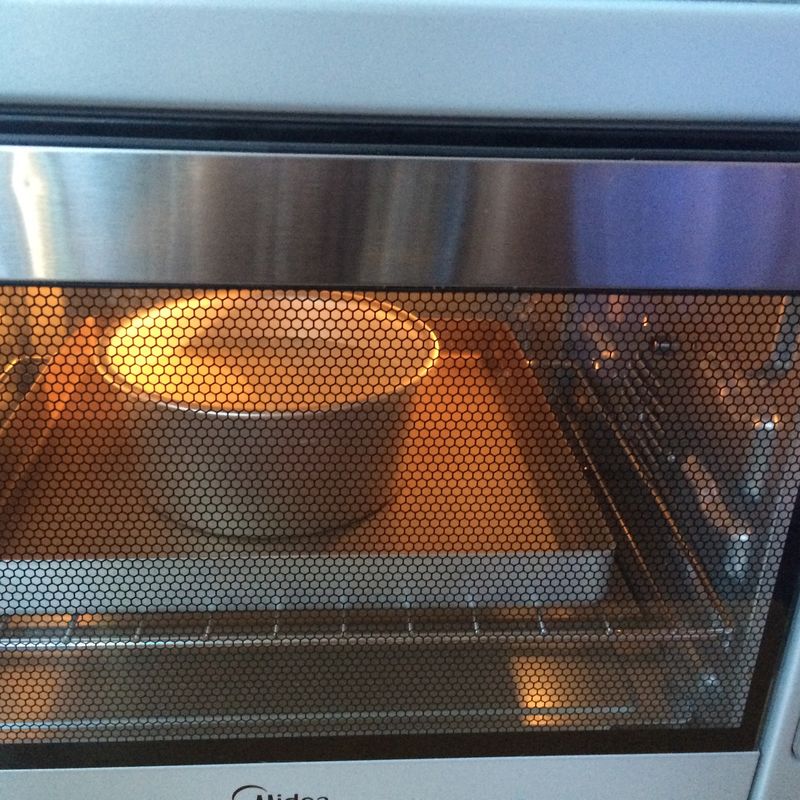 Put the mold into the preheated oven, bake the upper and lower layers at 130 to 140 degrees for 45 to 50 minutes, I have also baked it at 150 degrees, and it is slightly cracked, but it is said that the cracked chiffon tastes better, see if you like it, Everyone’s oven temperature will be different. It is recommended to buy a thermometer to measure the temperature of the oven, and observe the state of the cake during the baking process. If there is cracking, the temperature can be adjusted down ten degree, because the temperature is too high and it is easy to crack. 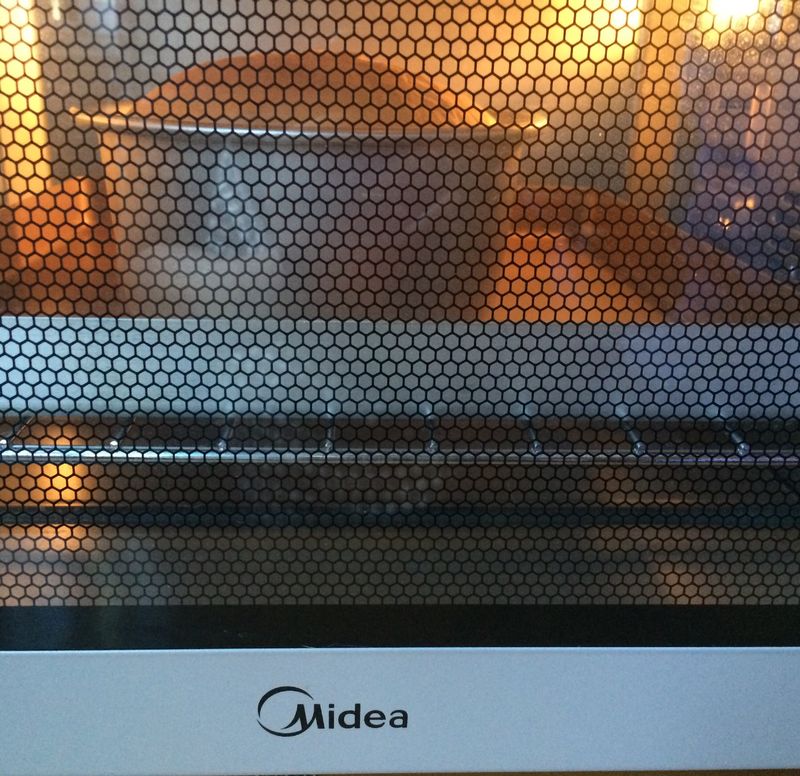 Here’s what it looks like when it’s been baked for fifteen minutes. If your cake does not grow tall at this time, you can increase the temperature by 10 degrees. It may also be that the egg white and egg yolk paste defoamed during the mixing process, and the egg white and yolk paste is also defoamed. If it is not mixed well, or the egg whites are not beaten until hard foaming, these situations will cause the cake to fail to grow taller. 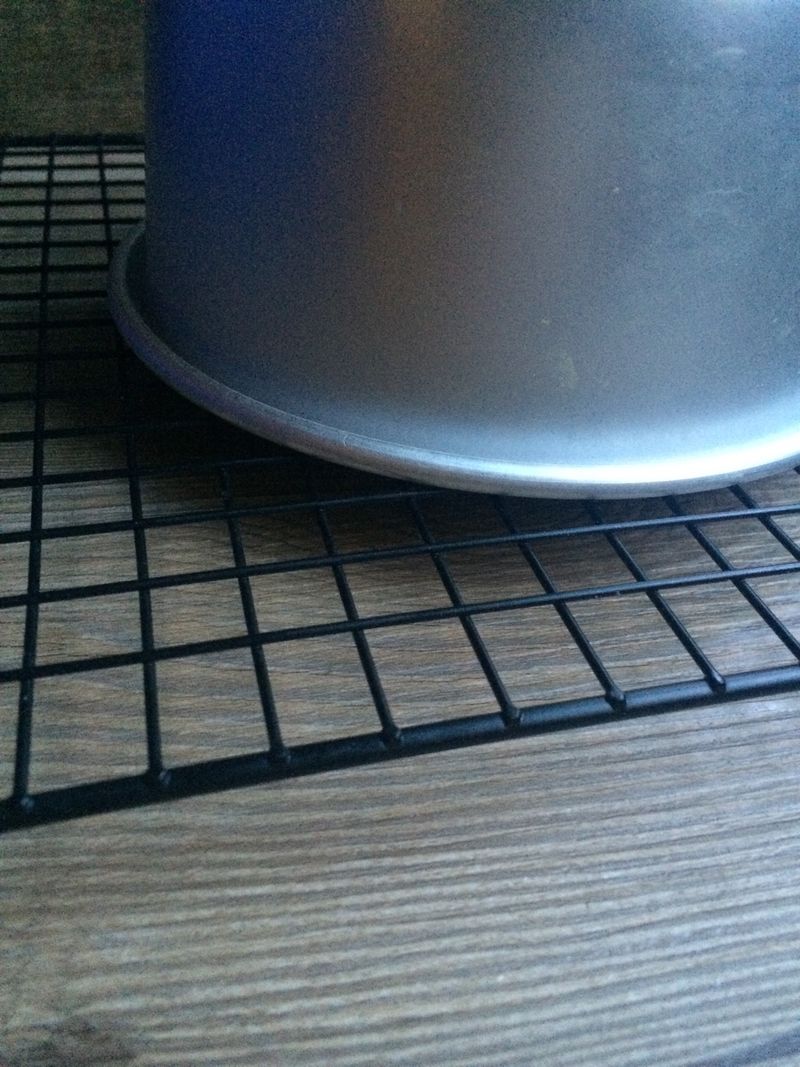 After the cake is baked, quickly remove the cake from the oven while wearing insulating gloves, drop it vertically to shake out the heat, and then immediately put it upside down on the drying wire and let it cool down. It will slump and retract. You can put two bowls under the grill to let the heat escape better. 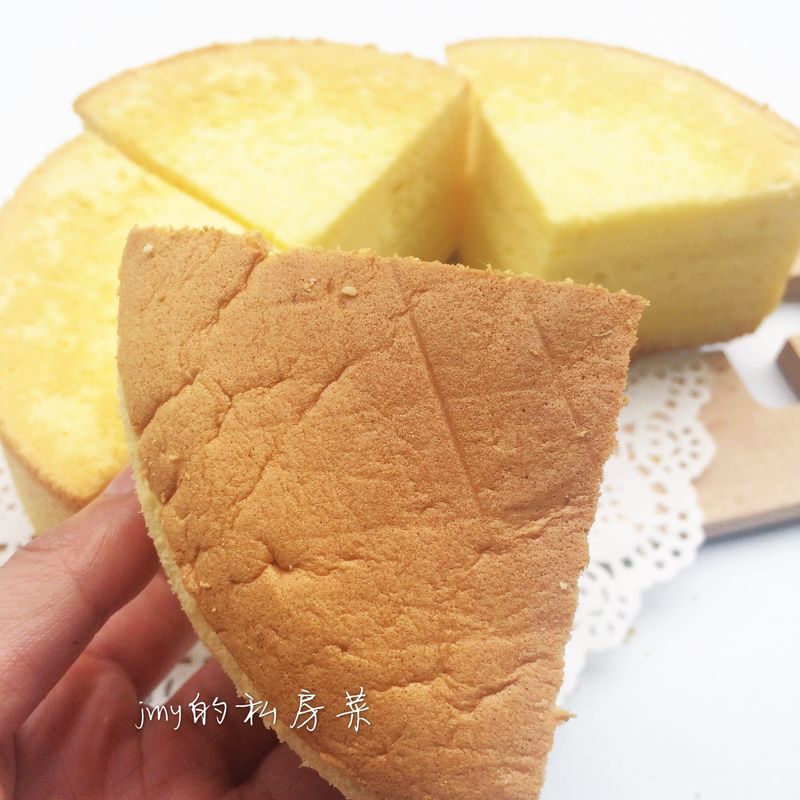 This is the surface of the cake, the color is very uniform. 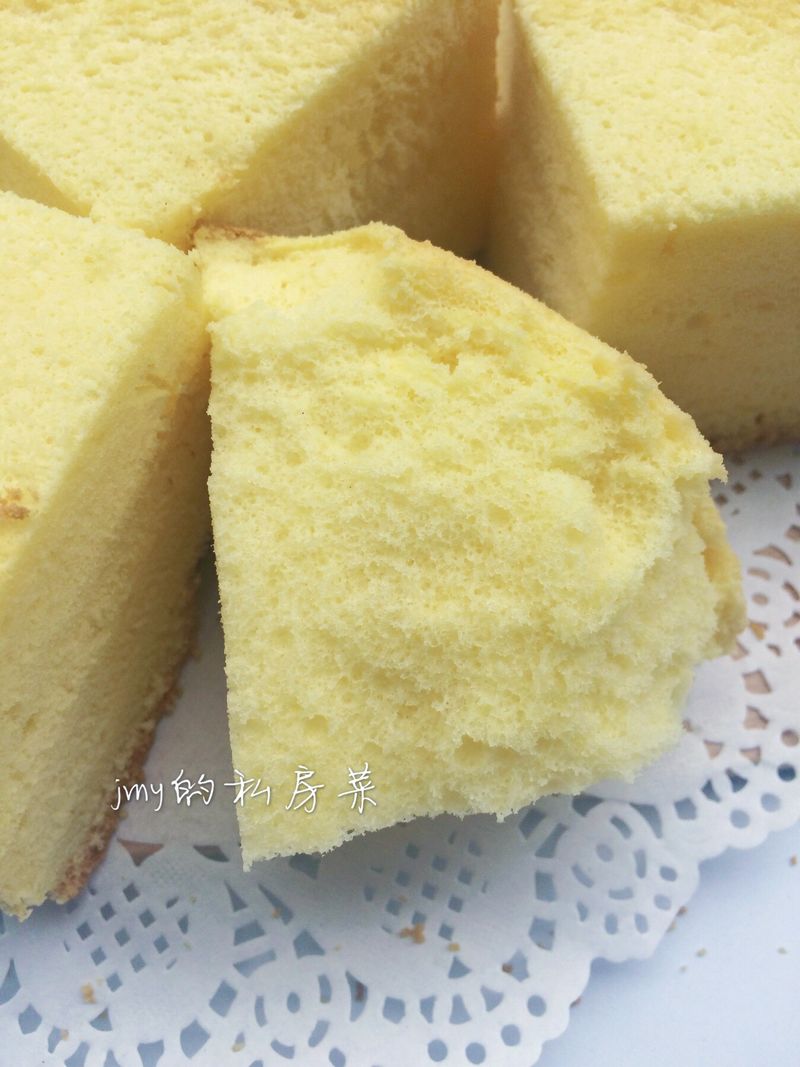 When you cut it open, the cake is very delicate and soft, and it tastes good in your mouth. 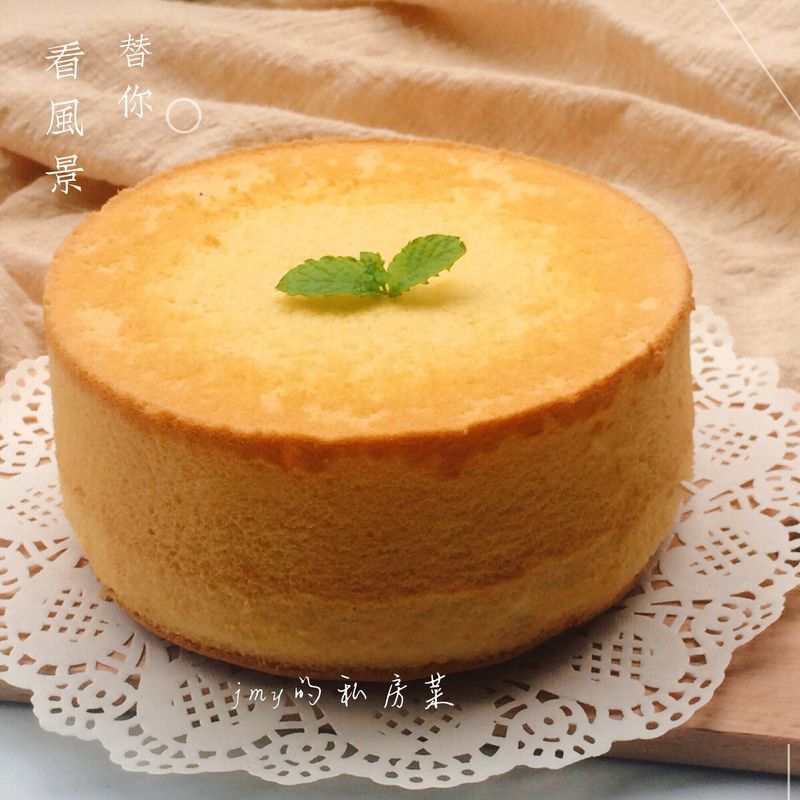 This chiffon is the result of trying several recipes, and I think it is very good. I recommend it to everyone.

It is said that psychologically, the more you know about a thing, the easier it is to fall in love with it. In China, desserts are not as popular as in France and Japan, and there are still a few people who love desserts. But I believe that more and more Chinese people will like desserts like chiffon cake in the future.

When baking this chiffon cake, you should pay attention to several details in the baking process.

1.Please do not open the oven door frequently during the baking process. the cold air will make the internal organization of the hurricane unstable.
2.How can you tell if a cake is done? Generally, the cake rushes to the highest point and then falls back. After it falls, it can be baked for ten minutes. Another method is to press the cake with your hand, and the cake will pop up quickly, indicating that it is cooked. If it is not cooked, you can extend the time or increase the temperature to bake for a while. If the cake is already dark in color but not yet cooked, cover it with tin foil and bake at a low temperature to prevent the color from being too dark.