If you are looking for Chinese steamed fish head recipe, this post is made just for you.

Steamed Fish Head with Chopped Chili Pepper (“Duo jiao Yu tou” in Chinese) is a famous traditional dish in Hunan Province, which belongs to Hunan cuisine. It may sounds disgusting, but it tastes great.

Fish head has high nutrition and good taste which is good for lowering blood fat, strengthening brain and delaying aging. chili peppers may also help control appetite and give your metabolism a little boost. As a result, it may help with weight loss.

This dish is one of the most famous and popular dish in Hunan cuisine. There is a saying in China that Steamed Fish Head with Chopped Chili Pepper can represent Hunan cuisine. because:

On September 10, 2018, “Chinese Cuisine” was officially released, and “Chopped Pepper Fish Head” was rated as one of Hunan’s top ten classic dishes.

Thedustconnection.com has many instructional videos dedicated to teaching cooking skills, you can learn every basic cooking technique with these super-simple how-to videos,

Clean the fish head, scrape off the scales and remove the remaining viscera. 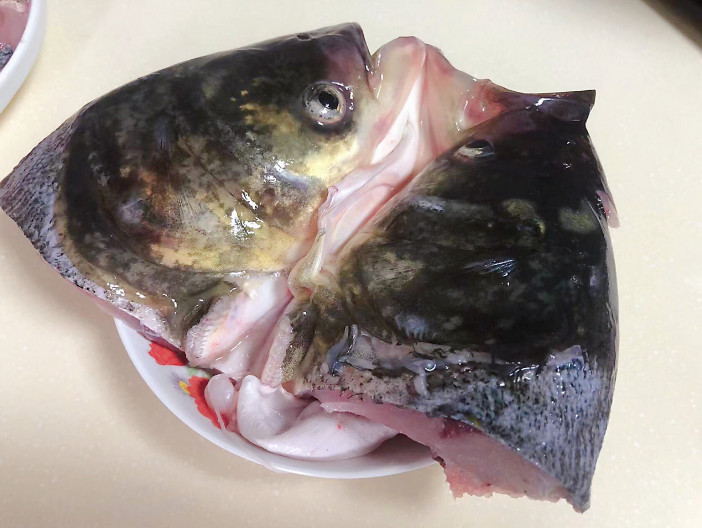 To make the fish head delicious, pre-treatment is very important, and it is too late to remove the fishy smell during steaming. Therefore, we must focus on the first step of cooking: washing and marinating fish. 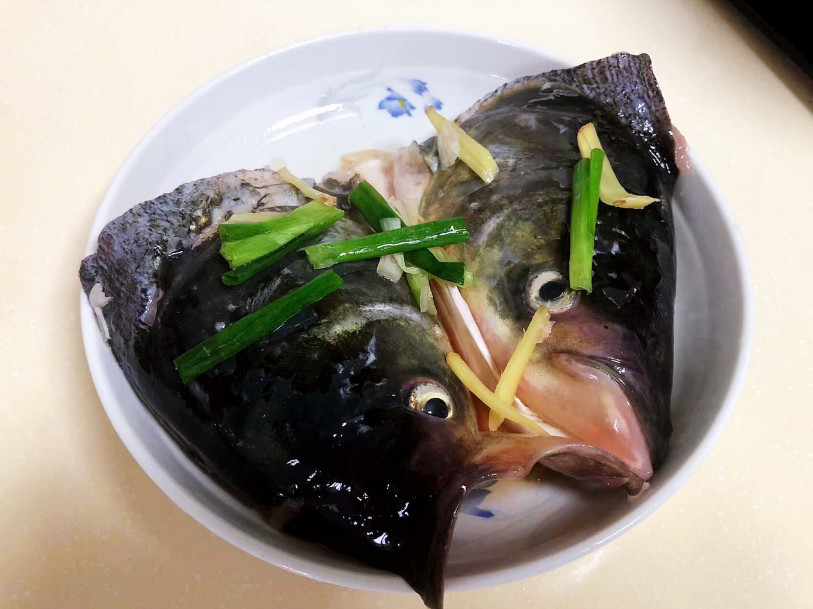 Heat up the pan, pour in the oil, when the oil is hot, add the chopped peppers, stir fry a few times, take it out and turn off the heat for later use. 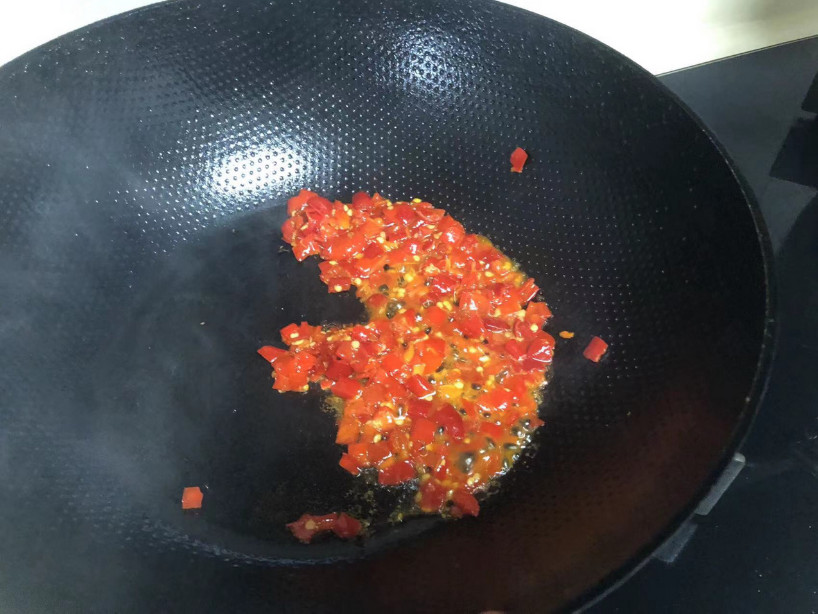 Rinse the marinated fish head with clean water, chop the garlic cloves into mud and spread it on the fish head, and then spread a layer of chopped pepper. After the water boils, steam it in a pot for 20 minutes. 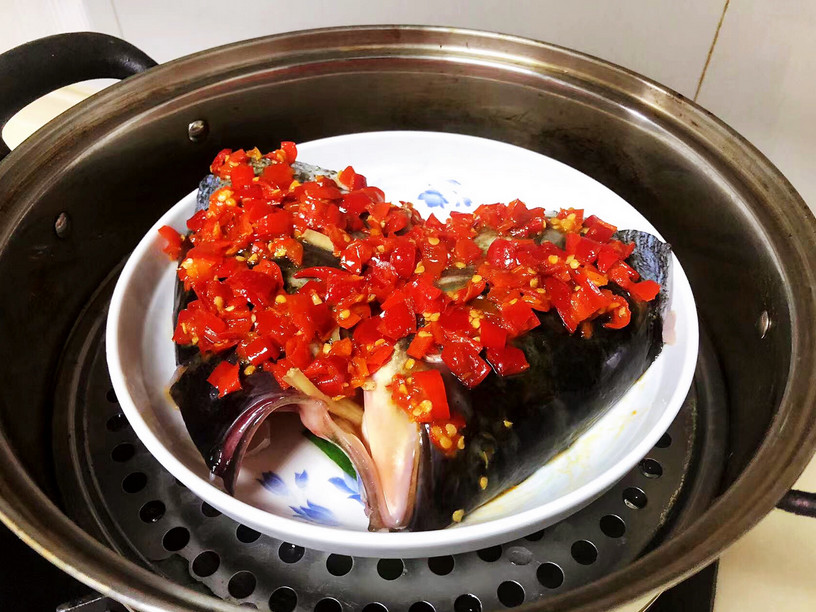 Take it out of the pan, sprinkle some chopped green onion and enjoy it beautifully. Heat some oil in a pan, and pour it over the fish head.

You can also pour Seasoned Soy Sauce for Seafood. 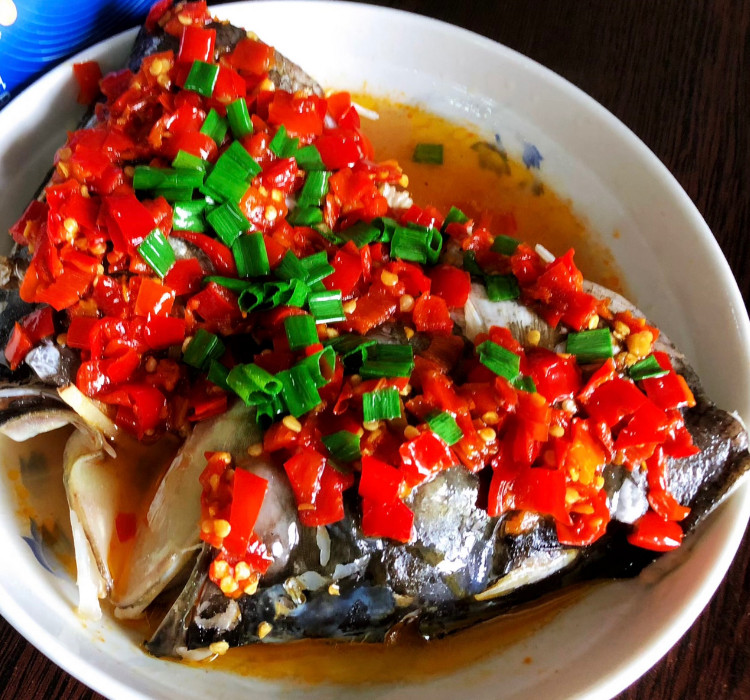 1.Since this dish is cooked by steaming, it must be marinated in advance, otherwise the fishy smell will be strong after steaming, which will affect the taste and taste.

3.When the fish head is done, pour away the excess water on the plate.

The story of Steamed Fish Head with Chopped Chili Pepper

It is said that the origin of chopped pepper fish head can be traced back to the Yongzheng period (1723-1736) of the Qing Dynasty, when Huang Zongxian, an anti-Qing literati, fled due to “The literary inquisition”.

He passed through a small village in Hunan and stayed with a poor farmer’s family. His host caught a fat head fish from the pond, and the hostess used it to cook for Huang Zongxian. After the fish is cleaned, the hostess cooks the fish in broth, then steam the chopped chili pepper and fish head together. Huang tasted it, he thought it was very delicious.

After Huang returned home, he asked the chef to improve this dish, which is the origin of “Steamed Fish Head with Chopped Chili Pepper”.

Hunan duo jiao is very famous, how do I make my own pepper seasoning?

Homemade Chili Sauce with No Additives! It’s time to forget the old godmother, if you love spicy food, save and share this chili pepper recipes. 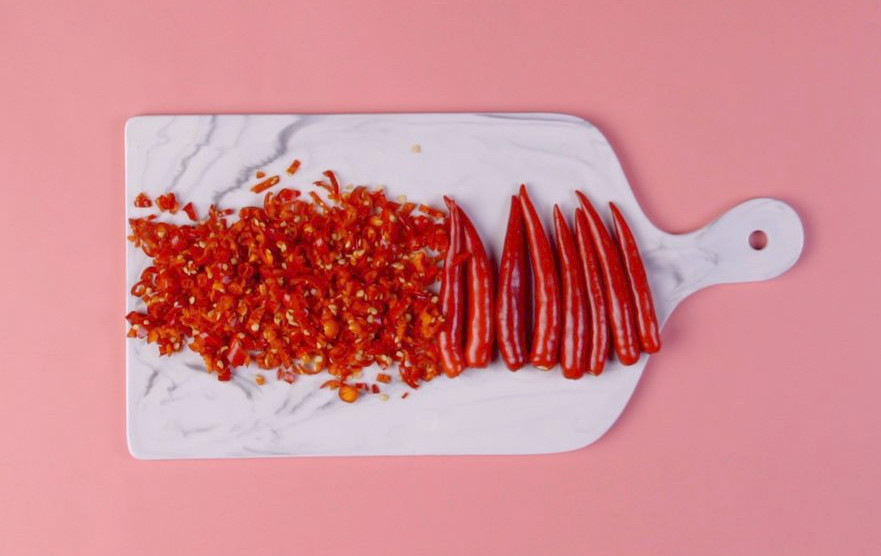 Peel ginger (15g) and garlic (30g) and chop into fine pieces, mix with minced chili pepper and put in a bowl. 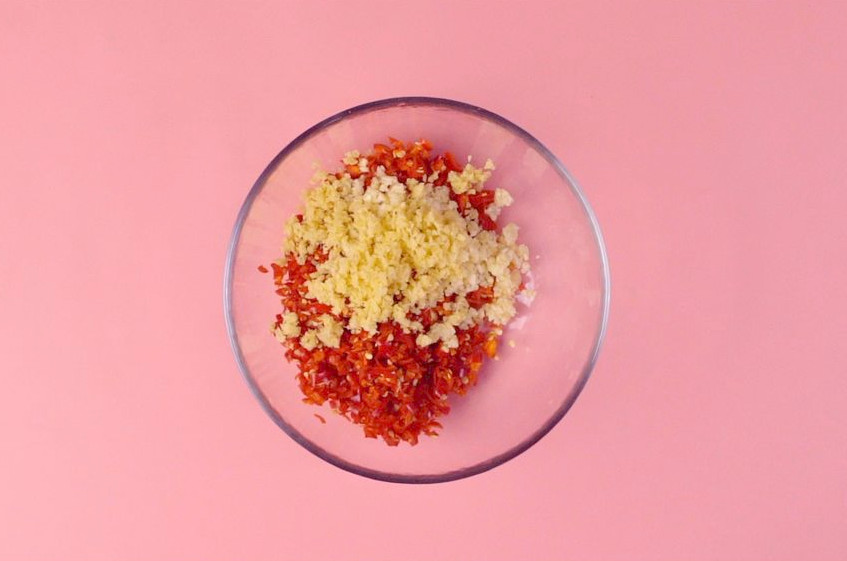 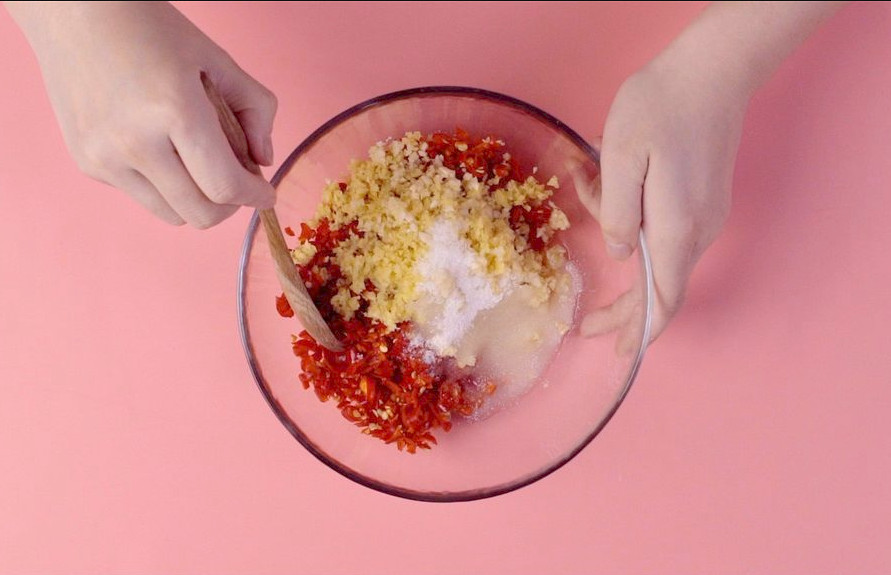 Cover with plastic wrap, let it ferment at room temperature for a day, open the seal and stir evenly. 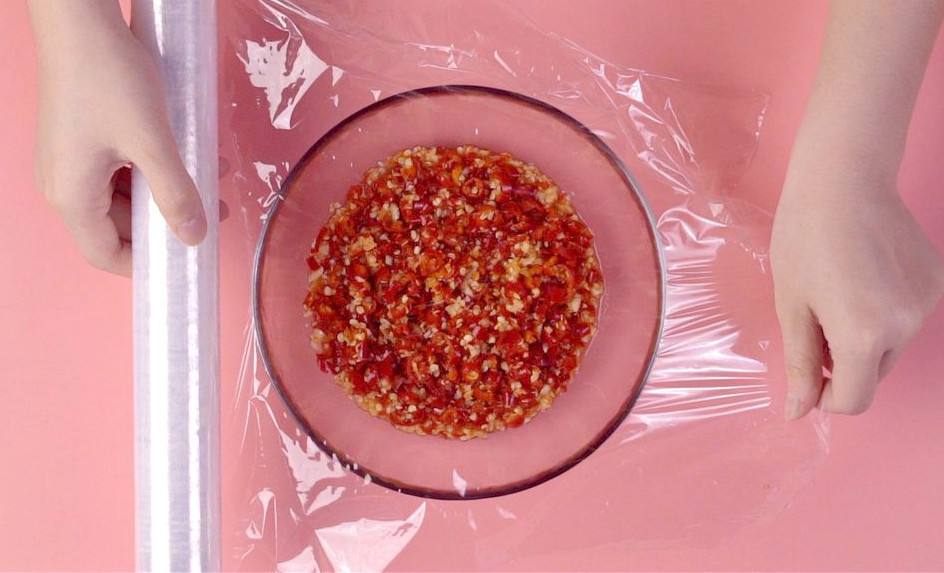 Pack into a clean airtight jar, be careful not to overfill, compact slightly. 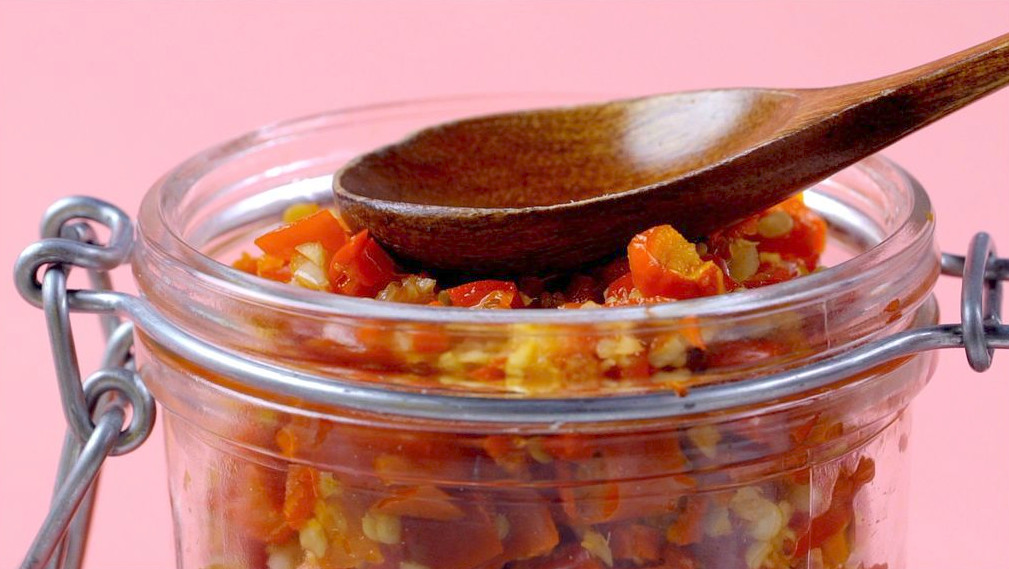 Seal it, put it in the refrigerator to refrigerate and ferment for a week, take it out and enjoy it. 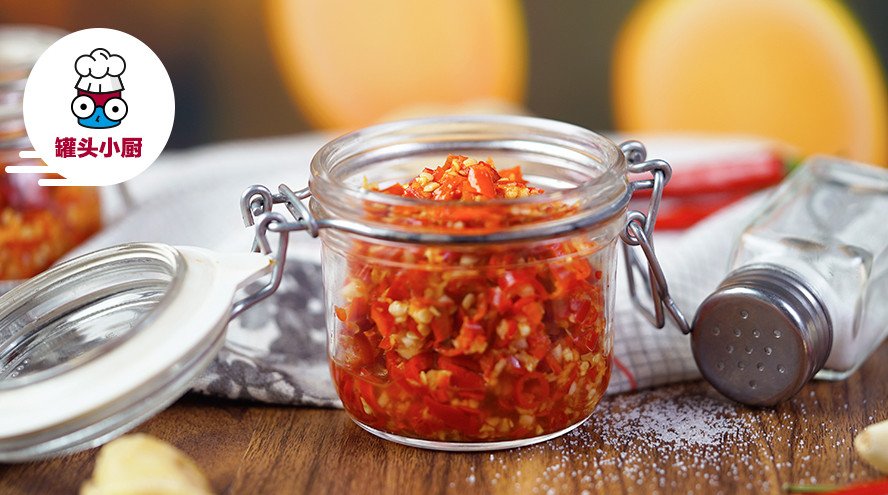 The chopped peppers are used up, because I often make fish heads with chopped peppers, so they are consumed faster. In fact, chopped pepper has many uses. It is more appropriate to say that it is a kind of food rather than a seasoning. Whether it is eaten directly, mixed with vegetables, stir-fried or dipped, it is very delicious.

In the past, I bought ready-made peppers from supermarkets. In fact, it is very simple to make chopped peppers. The taste is not inferior to those bought from supermarkets, and it does not contain preservatives. So this time I finally worked hard to make it myself, but there is a little fly in the ointment, the chopped peppers are a little bit broken, in fact, it can be bigger and better.

where to buy duo jiao?

Many friends asked me where to buy duo jiao? First, I would recommend to buy it on Amazon,  if you need it urgently, you can buy at local asian grocery stores.